Bhoothnath is said to be the manifestation of Lord Shiva, which seems to be the ever protecting deity of the town of Mandi, and the temple of Bhoothnath, has ‘Shikhara’, that includes a small structure and a cell exceeded by a steeple. Such porch is supported by the flute kind of pillars with caps carved upon the elephants. 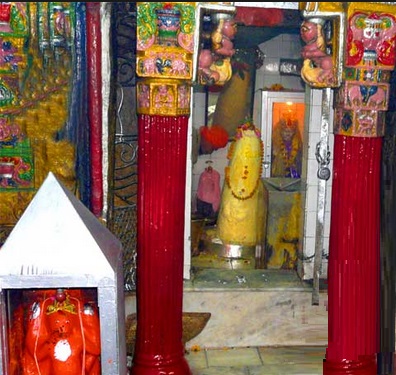 Shiva idol has knotted hair, and garland of skulls, as well as the en-laced serpent, a conch on one hand, and a Damru on the other hand, as well as a pair of earrings. The divine Mata Parvati, who wears a crown and stands besides the Lord Shiva. Even the bull and lion are also carved on it. Also, there are images of Bhairon and Lord Hanuman carved there. Apart from these, there is also the carving of the Ardhnari temple. This Ardhnari temple seems to be a modern temple of Mandi region. On the stone, one can find Lord Shiva on the right half side, and left half side is the Mata Parvati. The Nandi (vehicle of Lord Shiva) is present at the entrance of the temple (the ornamented double arch shaped entrance), and faces the deity.

Story Behind the Bhoothnath Temple in Mandi 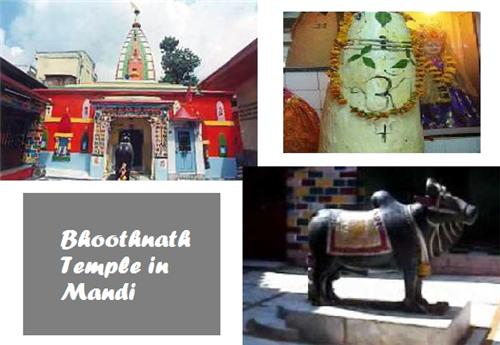 The Bhoothnath Temple is found to be the very ancient temple (devoted to Lord Shiva) in the Mandi District, that was constructed by the king called ‘Raja Ajber Sen’ during the year 1527 AD. There is also a myth narrated to the construction of the Bhoothnath temple. As per the history, the Raja Ajber Sen heard the story of a cow giving milk to the certain stone, on its own wish in a Mandi’s forest, but he did not know that, time comes when he will find idol of worship at this place.

Bhoothnath Temple Now and Then

It is said that, in the ancient days the land situated on the left bank of the Bead was left waste, where the cattle was suppose to graze. Now, the temple stands still with the name ‘Bhuthas’ or ‘Bhoothnath’, that was established at the main street (in the heart) of the town.

Where was the Temple Built?

During the festival of Mahashivratri, the temple is decorated in a grand way, and people from Mandi and surrounding places arrive here to offer their prayers as well as some people participate in the cultural programmes conducted here. This festival has been considered as the prime event and the central point among the 7 day festival.