Mandi one of the popular tourist center is located utmost at the geographical centre of Himachal Pradesh. The region got its name as ‘Mandi’ because of the trade routes from the areas of Ladakh till the locations in Punjab. Mandi in Hindi means “Market”. This city lies on the left side bank of the Beas River exactly at the foothills of the Range called ‘Shivalik’, with an elevation of 760 meters from the sea level. 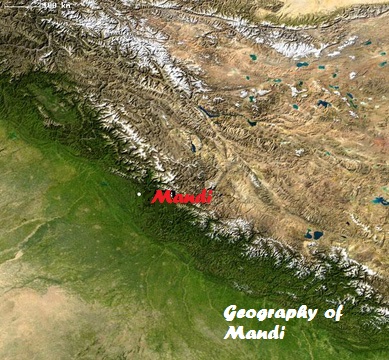 Mandi has become a home for large numbers of nicely carved stone temples which has Shikharas or top. Among which the temple of Bhutnath, Shyamakoli, as well as the Trilokinath, Tarna Devi Mandi, and Panchvaktra are the most beautiful temples situated at the Tarna hill.

The city of Mandi is located with latitude of 31.7069° N, and longitude of 76.9317° E and falls near to the hills and mountains of certain regions like the Sikandar Dhar, Dhar Kot as well as the Ghugar Dhar which are some of the important hills.

Mandi is said to be a land that looks like a ‘bowl shaped table’, which locates on the banks of the River Beas and surrounds by the Gandharv and Tarna Hill, as well as the Motipur Dhar and Rehra Dhar. There are two kinds of rivulets namely Suketi Khad and Skodhi Khad. These rivulets connect to the River Beas.

Apart from rivers, the Mandi terrain is also covered by the hills and mountains, and is geologically situated in the Seismic Zone (No.4), near to the line of fault which leads to the earthquakes. The City mainly falls on the National Highway – 20 and is well-connected with the cities like the Kullu, Bilaspur, Jogindernagar, the Palampur and Sundernagar, Chandigarh and Una, the Pathankot and Rewalsar.

The Topology of the Mandi region includes the number of hills, lakes as well as the floating islands too. The valley of Beas has been spread till the region of Mandi, with a number of the hitting valleys like the ‘Ran Khad’.

There are also certain notable tourist destination in Mandi, which include the Rewalsar Lake, the Prashar Lakes and the hydroelectric plant situated at the Jogindernagar. Along with the Sundernagar Project, as well as the Beas- Sutlej project and the Janjheli trekking zones (Picture Postcard Chiaroscuro) are the best places which are worth to visit.

Flora and Fauna in Mandi

The Flora and Fauna have occupied largely in the city of Mandi, and have taken a great place among the other regions of the Himalaya.

The Flora in Mandi consists of the fruit trees, which is approximately 15% of the total area of the cover of the fruit trees in Himachal Pradesh.  The city also covers by many grain fields, as well as the clad in pines, and the orchards which are surrounded by the hills. Also, the exceptional feature of the city of Mandi includes the occupancy of the Rock Salt and limestone, which are tested to check the availability of the Magnetite Coal as well as the China Clay.

Besides Flora, there is also a huge Fauna in Mandi which was protected earlier. Government is still working hard to maintain the forest like the ‘Bandli Sanctuary’, where the Chir pheasant and Himalayan Black Bear, as well as the Leopard are occupied. Apart from these animals, there are also the Rhesus Macaque and the common Palm Civet, including the Indian Hare, the Goral and the  Barking Deer.

During the winter season, the temperature seems to reach the freezing point when in other places it is just cold and need woolen sweaters. Due to the coldest climate in Mandi, it is recommended to wear heavy woolens. While in summer, the climate seems to be too hot and cotton wraps are required to control the heat passing through the body to some extent.

Thus, the Mandi climate constitutes both too hot summers as well as too cold winters. Also, the city of Mandi experiences the rainfalls during the end of the summer season. While, the Mandi city appears in the lowest climatic zone of the Himalaya. Such regions would really enjoy a wet temperature climate that surrounds the foothills of the region of about 450 meters to 900 meters which is against the climate (Dry-Cold Alpine) along with the snow-fall at the higher elevation of 2400 meters to 4800 meters.

Comments / Discussion Board - Geography of Mandi